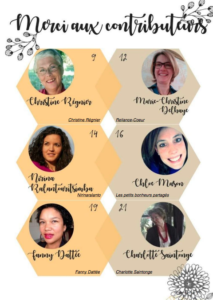 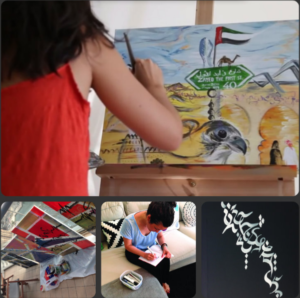 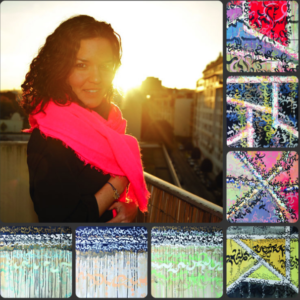 It takes a fresh eye and a unique creative perspective to do what artist Nirina Ralanto is doing. Nirina molds language and letters into a unique alphabet that is as creative as it is unconventional. Nirina shares her inspiration with Tempo…

I am half from France and half from Madagascar. My mixed origin makes me deeply aware of the diversity in the world, so that I have always been inspired by different and divergent points of view, and the necessity to reconcile the opposites and reinvent harmony within our world.

Since 2000, I have been a “teacher artist”, because I was teaching French language for 13 years in France, in the US and in Abu Dhabi, and during this career I always aimed to teach with a high sense of art and creativity. On July 2013, I decided to stop teaching at University, so that I can be a full-time artist and deepen my craft and research in painting and writing.

Now I am an “artist teacher”, because I aim to create art with a high sense of education and transmission. This is a good way to understand the purpose of my exhibition “Our New Alphabet” at the French Alliance of Abu Dhabi.

• How did you get into calligraphy and the arts?

Art has always been in my life. I was born to be an artist, this a calling that I felt since I was a child and I was very lucky that my parents naturally introduced me to all the arts: they brought me to music class when I was four (to this “musical garden” that was a simple introduction to music for young children), guitar class from five to 16 years old, singing in choirs, classical dance when I was 7, then contemporary and jazz dance later in the teenager age, piano and clarinet class when I was 12, acting class from 15 to 21 years old in different acting schools. Painting is the only art that I didn’t discover through school. I am an autodidact in this field…

About calligraphy in particular, I have always been passionate in handwriting. I learned ancient Greek in high school and loved to write this new alphabet. I also enjoyed copying the Gothic style of old manuscripts, or even some Egyptian hieroglyphs, Chinese ideograms or cuneiform writings. I remember that I used a lot of fountain pens for calligraphy in high school to write the date and the subject on my homework for literature or even mathematics or biology teachers! It was obviously of outside of the requirements, but I always wanted my papers to become small pieces of art, even in the not-so-creative student life… Later on, in the late 90’s when I was a student at Sorbonne in Paris, I remember buying dozens of these ubiquitous postcards in the Parisian shops of the Quartier Latin. These postcards were reproductions of sentences, words or poems made with Arabic calligraphy. I was in love with them and the beauty of the shapes, their translations and inspiring messages. They were quite new to me and very popular at that time, and I remember sending several of them every week to my sister and girlfriends, with my own text on the back of the Arabic calligraphy. At that time we didn’t have this frenetic invention called “internet” (or it was just the fresh beginning), and I used to go to the post office and send at least 10 letters or postcards per week! The Arabic calligraphy was a perfect combination for me between abstract, beauty, hidden and revealed messages for my loved ones.

Just recently, around 2009 when I lived in France, I started to draw some recurrent shapes in my paintings that people keep describing as “arabesques”. I was wondering where this obsession came from… It was actually the beginning of this inspiration. Then on August 2010 when I moved to Abu Dhabi to teach at Sorbonne on Reem Island, my attraction for the Arabic calligraphy became clear. I bought a pedagogic book about the alphabet and started to copy the letters. I took only very beginner class of Arabic during a few weeks, I learned the alphabet but didn’t get the opportunity to practice more, so that my knowledge is very weak. But with this basic foundation, I got enough to get inspired and feel free to improvise on the canvas. Very interesting phenomenon: it’s only when I left the UAE and went back home in France one year and half ago that I started to paint more and more calligraphy, as if I wanted to reconnect with this Arabic culture that I already missed, this Arabic culture that I wanted to thank for all the new perception that it gave to me and to my artistic inspiration.

So it’s been one year now that I experiment and develop this type of writing, with ink on paper or acrylic on canvas. It is not Arabic calligraphy but it is based on the style, of course.

• Describe your creative process – how do you do calligraphy?

I simply take the pen or the paintbrush and go with the flow. I don’t think at all, I don’t sketch anything, I just write and improvise. This is an automatic writing and what is very joyful for me is that I don’t know what I write. Once again, it looks like Arabic but it is not Arabic. It is made of different shapes inspired by many alphabets: Arabic, Latin, Greek, Tibetan, Bengali, Hindi, Devangari, Thai, Gothic, Cyrillic, Maya etc… My new collections is full of so many shapes, curves lines, dots and movements that there is no limit to find and identify the multidimensional origin of my inspiration since I am influenced consciously and subconsciously by everything I see during my readings and my travels. In fact, last year I traveled to India in Goa, to Nepal and to Indonesia in Bali and Jakarta and I am sure it also deeply conditioned me to create this “new alphabet”. But the key is: I don’t know the meaning of what I write.

To be able to combine and harmonize all these influences and these pieces of alphabets gives me a high sense of belonging and freedom at the same time. The creative process is based on spontaneity and let-it-go. Basically I do this kind of free and yet un-decoded calligraphy like I do meditation. I am in a “no-thought state”… or I try to be… Maybe can I reach a higher, transcendental and universal language? Maybe some people one day will be able to read what I wrote without knowing the meaning of what I write? Like a new Rosetta stone? Who knows?

The creative process is supposed to keep going through the viewer. The un-decoded calligraphy of this “new alphabet” will obviously speak to him/her, here and there. It is his/her turn to create by translating or decoding what he/she perceives, and share his/her interpretation and confront it with others.

I called it “Our New Alphabet” because it is not only mine, it is ours: it aims to open the dialog and interpretation of the diverse points of view. And since none of us have the actual translation… nobody is right, nobody is wrong, everybody has the right to express how he/she feels and there is only room for dialog, listening skills, acceptance and curiosity towards the other point of view. “Our New Alphabet” is ultimately a place for otherness.

• How did the people around you react when they saw your work?

Some Emirati friends said: “this is bizarre, to me it is Arabic but I cannot read!”

Some French friends said: “I am sure that if a Chinese person see your painting he will say, it is Chinese, but I cannot identify what it says…!”

Some Iraqi friend said: “I can actually read some half words here and there!”

Some just said that they love it because it is simply beautiful to watch.

Someone told at the opening: “Congratulations! You really invented a new language!”

All these reactions make me happy because I have a feeling I really talk to people’s heart, beyond words.

• Which artists inspire you?

I love the Spanish painter Salvador Dali and the Belgian René Magritte. They both are painters from the surrealist movement, from different styles of course, but both passionate about the link between representation and expression, objects and words. Their paintings (linked to their titles) are teaching us something deeper and more mysterious that the only language can do. When I see Dali and Magritte’s work, it gives me chills. To me, to feel this vibration is a proof that the artist touched the Truth and was able to transmit it to us. This is what I want to reach through art: go beyond the common system of beliefs, try to reach the universal and transcendental truth and share it with the world.

• Describe a normal day in the life of Nirina Ralanto.

In my new full-time artist life, I am feel very grateful for having a free and flexible schedule!

–        write a few pages in my notebook: could be the dreams I had, or simple thoughts

–        Enjoy lunch (or sometimes skip lunch when I am so immersed in my painting that I don’t see time passing by!)

In the afternoon: different options

–        meet friends that inspire me, talk, collaborate to collective art projects and philosophy about the world and the contribution we could make to transform it into a better place

–        Sleep (sleep and dream are also parts of my favorite artistic activities! I really recharge my creative batteries while sleeping and dreaming)

-While my webseries has been selected at the Vancouver Webfest in Canada on March the 6th-8th and will also be launched on Indieflix channel for a few months and the new platform The Big Picture, my brother and I are finalizing our newest version of a feature film, a French comedy based on the webseries and our grandmother character. We are now trying to produce this movie in France.

-I already sold some paintings exhibited at French Alliance and I hope that more will be sold because 20% of the proceeds will be donated to women labourers in Mussafah. When the exhibition stops, an old student of mine from Sorbonne, passionate about art, will take care of the paintings and maybe organize the next event.

• How can people get in touch with you? Any websites and/or social media platforms you’re into?

2) My art prints are available on the website Society6

–Up To You Gallery (for paintings)

–My weekend with Mémé (The French docu-webseries with English subtitles)

–Welcome to my brain (movie, work in progress)

4) You can read my French poetry about meditation on the “short edition” writers’ platform, on my personal page Short edition.

• Finally, what’s your message to aspiring artists out there?

Go back to the Child in you

Be aligned with yourself

Be Grateful for every little thing

Express everything you have in your Heart

Your life will be your art

Your art will be your life 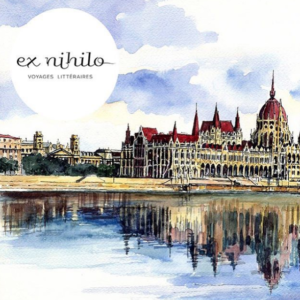 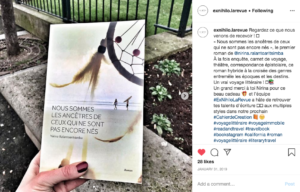